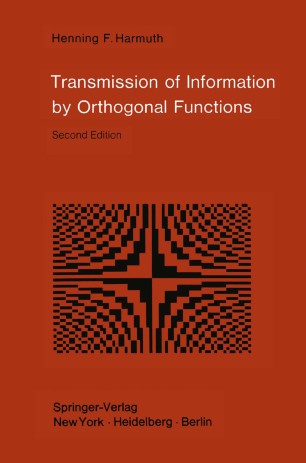 The orthogonality of functions has been exploited in communications since its very beginning. Conscious and extensive use was made of it by Kotel'nikov in theoretical work in 1947. Ten years later a considerable number of people were working in this field. However, little experimental use could be made of the theoretical results before the arrival of solid state operational amplifiers and integrated circuits. The advantages of Walsh functions, which are emphasized in this book, were recognized independently by several scientists in the early sixties. Among them were E. Gibbs, K. Henderson, F.Ohnsorg, G. Sandy and E. Vandivere, whose work was not published until many years later. Somewhat more than half the illustrations in this second edition were not contained in the first edition and this reflects the changes in contents. The most striking difference between the two editions is the progress toward practical applications made in the intervening three years. However, it may turn out that the most important change is one that appears rather theoretical on the surface and that concerns shift-invariant features strongly connected with sine-cosine functions. These functions are projections of the exponential function which, in turn, is the character group of the real numbers. The topology of the real numbers is generally accepted to be the same as that of time or a one-dimensional space, and this is the basis for a variety of claims that sinusoidal functions are unique and superior to all others.