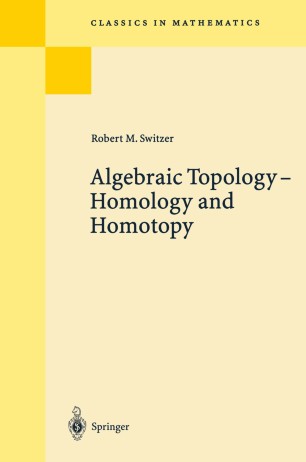 Part of the Classics in Mathematics book series (volume 212)

From the reviews:
"The author has attempted an ambitious and most commendable project. He assumes only a modest knowledge of algebraic topology on the part of the reader to start with, and he leads the reader systematically to the point at which he can begin to tackle problems in the current areas of research centered around generalized homology theories and their applications. ... The author has sought to make his treatment complete and he has succeeded. The book contains much material that has not previously appeared in this format. The writing is clean and clear and the exposition is well motivated. ... This book is, all in all, a very admirable work and a valuable addition to the literature...
(S.Y. Husseini in Mathematical Reviews, 1976)

After majoring in mathematics at Harvard College, he completed his PhD at Stanford University in 1965. He spent 5 years as lecturer at the University of Manchester, England, and then moved to Goettingen, Germany, where he has been Professor of Mathematics since 1973. In the early 1980s his research concentrated on obstruction theory in connection with holomorphic bundles on projective spaces.

In 1984 he switched his attention to Computer Science and has been teaching and working in that field ever since.

"This book contains much impressive mathematics, namely the achievements by algebraic topologists in obtaining extensive information on the stable homotopy groups of spheres, and the computation of various cobordism groups. It is a long book, and for the major part a very advanced book. ... (It is) suitable for specialists, or for those who already know what algebraic topology is for, and want a guide to the principal methods of stable homotopy theory."
R. Brown in Bulletin of the London Mathematical Society, 1980

"In the more than twenty five years since its first appearance, the book has met with favorable response, both in its use as a text and as reference. It is a good course which leads the reader systematically to the point at which he can begin to tackle problems in algebraic topology. … This book remains one of the best sources for the material which every young algebraic topologist should know." (Corina Mohorianu, Zentralblatt MATH, Vol. 1003 (3), 2003)