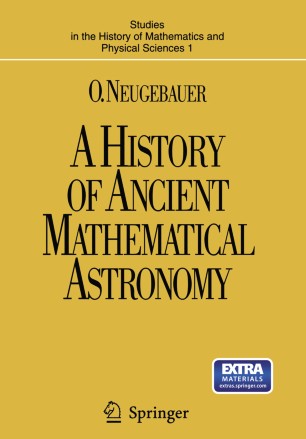 A History of Ancient Mathematical Astronomy

Part of the Studies in the History of Mathematics and Physical Sciences book series (HISTORY, volume 1)

"This monumental work will henceforth be the standard interpretation of ancient mathematical astronomy. It is easy to point out its many virtues: comprehensiveness and common sense are two of the most important. Neugebauer has studied profoundly every relevant text in Akkadian, Egyptian, Greek, and Latin, no matter how fragmentary; [...] With the combination of mathematical rigor and a sober sense of the true nature of the evidence, he has penetrated the astronomical and the historical significance of his material. [...] His work has been and will remain the most admired model for those working with mathematical and astronomical texts.