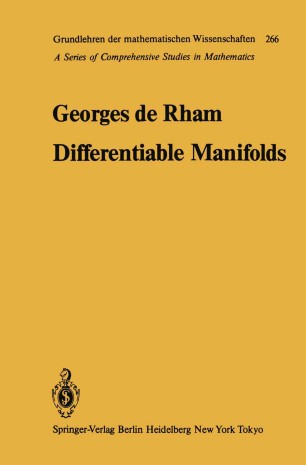 In this work, I have attempted to give a coherent exposition of the theory of differential forms on a manifold and harmonic forms on a Riemannian space. The concept of a current, a notion so general that it includes as special cases both differential forms and chains, is the key to understanding how the homology properties of a manifold are immediately evident in the study of differential forms and of chains. The notion of distribution, introduced by L. Schwartz, motivated the precise definition adopted here. In our terminology, distributions are currents of degree zero, and a current can be considered as a differential form for which the coefficients are distributions. The works of L. Schwartz, in particular his beautiful book on the Theory of Distributions, have been a very great asset in the elaboration of this work. The reader however will not need to be familiar with these. Leaving aside the applications of the theory, I have restricted myself to considering theorems which to me seem essential and I have tried to present simple and complete of these, accessible to each reader having a minimum of mathematical proofs background. Outside of topics contained in all degree programs, the knowledge of the most elementary notions of general topology and tensor calculus and also, for the final chapter, that of the Fredholm theorem, would in principle be adequate.