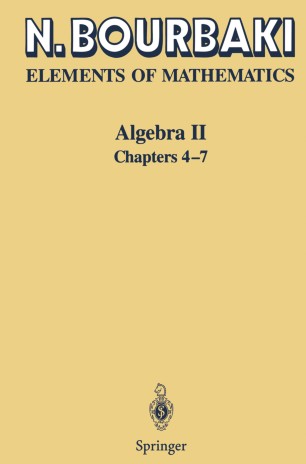 Part of the Elements of Mathematics book series

This is a softcover reprint of the English translation of 1990 of the revised and expanded version of Bourbaki's, Algèbre, Chapters 4 to 7 (1981).

This completes Algebra, 1 to 3, by establishing the theories of commutative fields and modules over a principal ideal domain. Chapter 4 deals with polynomials, rational fractions and power series. A section on symmetric tensors and polynomial mappings between modules, and a final one on symmetric functions, have been added. Chapter 5 was entirely rewritten. After the basic theory of extensions (prime fields, algebraic, algebraically closed, radical extension), separable algebraic extensions are investigated, giving way to a section on Galois theory. Galois theory is in turn applied to finite fields and abelian extensions. The chapter then proceeds to the study of general non-algebraic extensions which cannot usually be found in textbooks: p-bases, transcendental extensions, separability criterions, regular extensions. Chapter 6 treats ordered groups and fields and based on it is Chapter 7: modules over a p.i.d. studies of torsion modules, free modules, finite type modules, with applications to abelian groups and endomorphisms of vector spaces. Sections on semi-simple endomorphisms and Jordan decomposition have been added.