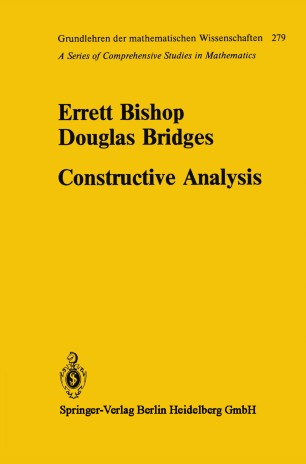 This work grew out of Errett Bishop's fundamental treatise 'Founda­ tions of Constructive Analysis' (FCA), which appeared in 1967 and which contained the bountiful harvest of a remarkably short period of research by its author. Truly, FCA was an exceptional book, not only because of the quantity of original material it contained, but also as a demonstration of the practicability of a program which most ma­ thematicians believed impossible to carry out. Errett's book went out of print shortly after its publication, and no second edition was produced by its publishers. Some years later, 'by a set of curious chances', it was agreed that a new edition of FCA would be published by Springer Verlag, the revision being carried out by me under Errett's supervision; at the same time, Errett gener­ ously insisted that I become a joint author. The revision turned out to be much more substantial than we had anticipated, and took longer than we would have wished. Indeed, tragically, Errett died before the work was completed. The present book is the result of our efforts. Although substantially based on FCA, it contains so much new material, and such full revision and expansion of the old, that it is essentially a new book. For this reason, and also to preserve the integrity of the original, I decided to give our joint work a title of its own. Most of the new material outside Chapter 5 originated with Errett.