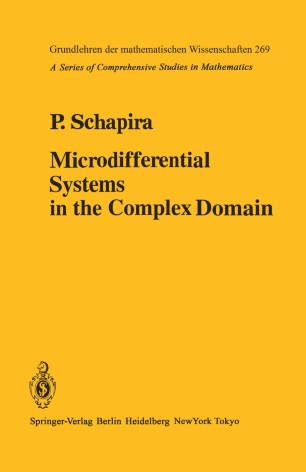 Microdifferential Systems in the Complex Domain

The words "microdifferential systems in the complex domain" refer to seve­ ral branches of mathematics: micro local analysis, linear partial differential equations, algebra, and complex analysis. The microlocal point of view first appeared in the study of propagation of singularities of differential equations, and is spreading now to other fields of mathematics such as algebraic geometry or algebraic topology. How­ ever it seems that many analysts neglect very elementary tools of algebra, which forces them to confine themselves to the study of a single equation or particular square matrices, or to carryon heavy and non-intrinsic formula­ tions when studying more general systems. On the other hand, many alge­ braists ignore everything about partial differential equations, such as for example the "Cauchy problem", although it is a very natural and geometri­ cal setting of "inverse image". Our aim will be to present to the analyst the algebraic methods which naturally appear in such problems, and to make available to the algebraist some topics from the theory of partial differential equations stressing its geometrical aspects. Keeping this goal in mind, one can only remain at an elementary level.