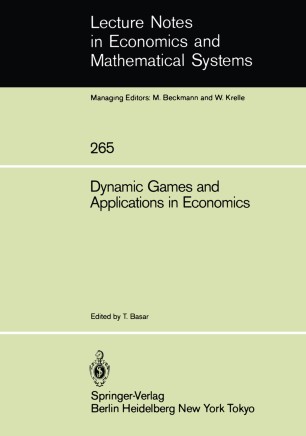 Dynamic Games and Applications in Economics

This volume contains eleven articles which deal with different aspects of dynaoic and differential game theory and its applications in economic modeling and decision making. All but one of these were presented as invited papers in special sessions I organized at the 7th Annual Conference on Economic Dynamics and Control in London, England, during the period June 26-28, 1985. The first article, which comprises Chapter 1, provides a general introduction to the topic of dynamic and differential game theory, discusses various noncooperative equilibrium solution concepts, includ­ ing Nash, Stackelberg, and Consistent Conjectural Variations equilibria, and a number of issues such as feedback and time-consistency. The second chapter deals with the role of information in Nash equilibria and the role of leadership in Stackelberg problems. A special type of a Stackelberg problem is the one in which one dominant player (leader) acquires dynamic information involving the actions of the others (followers), and constructs policies (so-called incentives) which enforce a certain type of behavior on the followers; Chapter 3 deals with such a class of problems and presents some new theoretical results on the existence of affine incentive policies. The topic of Chapter 4 is the computation of equilibria in discounted stochastic dynamic games. Here, for problems with finite state and decision spaces, existing algorithms are reviewed, with a comparative study of their speeds of convergence, and a new algorithm for the computation of nonzero-sum game equilibria is presented.