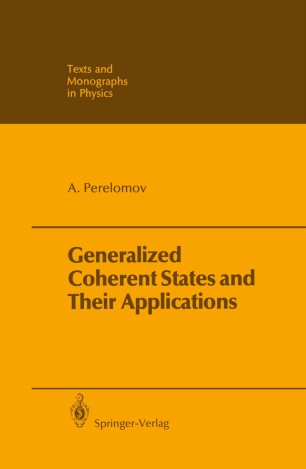 Generalized Coherent States and Their Applications

This monograph treats an extensively developed field in modern mathematical physics - the theory of generalized coherent states and their applications to various physical problems. Coherent states, introduced originally by Schrodinger and von Neumann, were later employed by Glauber for a quantal description of laser light beams. The concept was generalized by the author for an arbitrary Lie group. In the last decade the formalism has been widely applied to various domains of theoretical physics and mathematics. The area of applications of generalized coherent states is very wide, and a comprehensive exposition of the results in the field would be helpful. This monograph is the first attempt toward this aim. My purpose was to compile and expound systematically the vast amount of material dealing with the coherent states and available through numerous journal articles. The book is based on a number of undergraduate and postgraduate courses I delivered at the Moscow Physico-Technical Institute. In its present form it is intended for professional mathematicians and theoretical physicists; it may also be useful for university students of mathematics and physics. In Part I the formalism is elaborated and explained for some of the simplest typical groups. Part II contains more sophisticated material; arbitrary Lie groups and symmetrical spaces are considered. A number of examples from various areas of theoretical and mathematical physics illustrate advantages of this approach, in Part III. It is a pleasure for me to thank Dr. Yu. Danilov for many useful remarks.