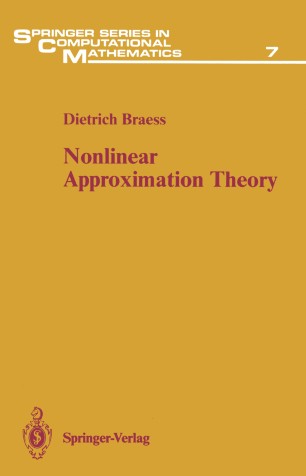 The first investigations of nonlinear approximation problems were made by P.L. Chebyshev in the last century, and the entire theory of uniform approxima­ tion is strongly connected with his name. By making use of his ideas, the theories of best uniform approximation by rational functions and by polynomials were developed over the years in an almost unified framework. The difference between linear and rational approximation and its implications first became apparent in the 1960's. At roughly the same time other approaches to nonlinear approximation were also developed. The use of new tools, such as nonlinear functional analysis and topological methods, showed that linearization is not sufficient for a complete treatment of nonlinear families. In particular, the application of global analysis and the consideration of flows on the family of approximating functions intro­ duced ideas which were previously unknown in approximation theory. These were and still are important in many branches of analysis. On the other hand, methods developed for nonlinear approximation prob­ lems can often be successfully applied to problems which belong to or arise from linear approximation. An important example is the solution of moment problems via rational approximation. Best quadrature formulae or the search for best linear spaces often leads to the consideration of spline functions with free nodes. The most famous problem of this kind, namely best interpolation by poly­ nomials, is treated in the appendix of this book.