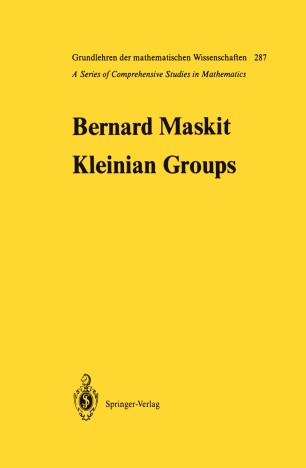 The modern theory of Kleinian groups starts with the work of Lars Ahlfors and Lipman Bers; specifically with Ahlfors' finiteness theorem, and Bers' observation that their joint work on the Beltrami equation has deep implications for the theory of Kleinian groups and their deformations. From the point of view of uniformizations of Riemann surfaces, Bers' observation has the consequence that the question of understanding the different uniformizations of a finite Riemann surface poses a purely topological problem; it is independent of the conformal structure on the surface. The last two chapters here give a topological description of the set of all (geometrically finite) uniformizations of finite Riemann surfaces. We carefully skirt Ahlfors' finiteness theorem. For groups which uniformize a finite Riemann surface; that is, groups with an invariant component, one can either start with the assumption that the group is finitely generated, and then use the finiteness theorem to conclude that the group represents only finitely many finite Riemann surfaces, or, as we do here, one can start with the assumption that, in the invariant component, the group represents a finite Riemann surface, and then, using essentially topological techniques, reach the same conclusion. More recently, Bill Thurston wrought a revolution in the field by showing that one could analyze Kleinian groups using 3-dimensional hyperbolic geome­ try, and there is now an active school of research using these methods.