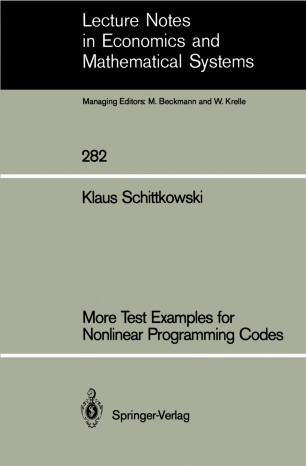 This collection of 188 nonlinear programming test examples is a supplement of the test problem collection published by Hock and Schittkowski [2]. As in the former case, the intention is to present an extensive set of nonlinear programming problems that were used by other authors in the past to develop, test or compare optimization algorithms. There is no distinction between an "easy" or "difficult" test problem, since any related classification must depend on the underlying algorithm and test design. For instance, a nonlinear least squares problem may be solved easily by a special purpose code within a few iterations, but the same problem can be unsolvable for a general nonlinear programming code due to ill-conditioning. Thus one should consider both collections as a possible offer to choose some suitable problems for a specific test frame. One difference between the new collection and the former one pub­ lished by Hock and Schittkowski [2], is the attempt to present some more realistic or "real world" problems. Moreover a couple of non­ linear least squares test problems were collected which can be used e. g. to test data fitting algorithms. The presentation of the test problems is somewhat simplified and numerical solutions are computed only by one nonlinear programming code, the sequential quadratic programming algorithm NLPQL of Schittkowski [3]. But both test problem collections are implemeted in the same way in form of special FORTRAN­ subroutines, so that the same test programs can be used.