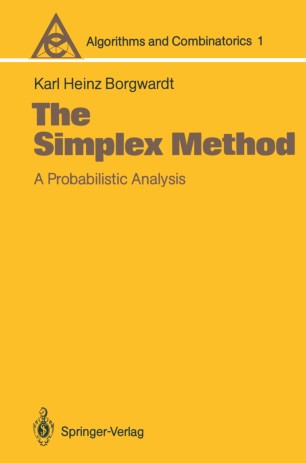 Part of the Algorithms and Combinatorics book series (AC, volume 1)

For more than 35 years now, George B. Dantzig's Simplex-Method has been the most efficient mathematical tool for solving linear programming problems. It is proba­ bly that mathematical algorithm for which the most computation time on computers is spent. This fact explains the great interest of experts and of the public to understand the method and its efficiency. But there are linear programming problems which will not be solved by a given variant of the Simplex-Method in an acceptable time. The discrepancy between this (negative) theoretical result and the good practical behaviour of the method has caused a great fascination for many years. While the "worst-case analysis" of some variants of the method shows that this is not a "good" algorithm in the usual sense of complexity theory, it seems to be useful to apply other criteria for a judgement concerning the quality of the algorithm. One of these criteria is the average computation time, which amounts to an anal­ ysis of the average number of elementary arithmetic computations and of the number of pivot steps. A rigid analysis of the average behaviour may be very helpful for the decision which algorithm and which variant shall be used in practical applications. The subject and purpose of this book is to explain the great efficiency in prac­ tice by assuming certain distributions on the "real-world" -problems. Other stochastic models are realistic as well and so this analysis should be considered as one of many possibilities.