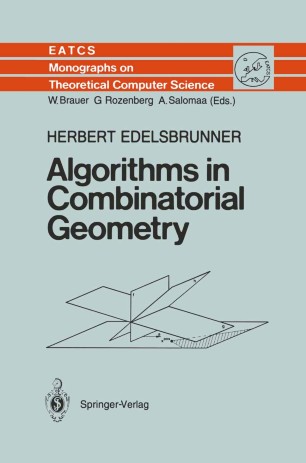 Computational geometry as an area of research in its own right emerged in the early seventies of this century. Right from the beginning, it was obvious that strong connections of various kinds exist to questions studied in the considerably older field of combinatorial geometry. For example, the combinatorial structure of a geometric problem usually decides which algorithmic method solves the problem most efficiently. Furthermore, the analysis of an algorithm often requires a great deal of combinatorial knowledge. As it turns out, however, the connection between the two research areas commonly referred to as computa­ tional geometry and combinatorial geometry is not as lop-sided as it appears. Indeed, the interest in computational issues in geometry gives a new and con­ structive direction to the combinatorial study of geometry. It is the intention of this book to demonstrate that computational and com­ binatorial investigations in geometry are doomed to profit from each other. To reach this goal, I designed this book to consist of three parts, acorn binatorial part, a computational part, and one that presents applications of the results of the first two parts. The choice of the topics covered in this book was guided by my attempt to describe the most fundamental algorithms in computational geometry that have an interesting combinatorial structure. In this early stage geometric transforms played an important role as they reveal connections between seemingly unrelated problems and thus help to structure the field.