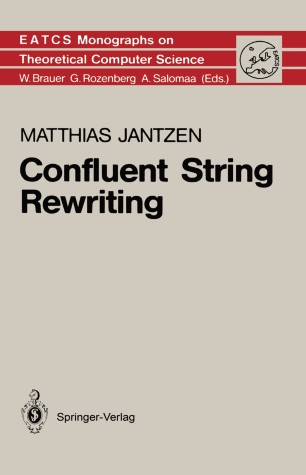 Replacement systems, such as term rewriting systems, tree manipulat­ ing systems, and graph grammars, have been used in Computer Science in the context of theorem proving, program optimization, abstract data types, algebraic simplification, and symbolic comput­ ation. Replacement systems for strings arose about seventy years earlier in the area of combinatory logic and group theory. The most natural and appropriate formalism for dealing with string rewriting is the notion of a semi-Thue system and this monograph treats its central aspects. The reduction relation is here defined firstly by the direction of the rules and secondly by some metric that yields efficient algorithms. These systems are general enough to discuss the basic notions of arbitrary replacement systems, such as termination, confluence, and the Church-Rosser property in its original meaning. Confluent semi-Thue systems in which each and every derivation consists of finitely many steps only are called complete; they guarantee the existence of unique normal forms as canonical representatives of the Thue congruence classes. Each such system can be considered a nondeterministic algorithm for the word problem which works correctly without backtracking. This is often conceptually simpler and more elegant than an ad hoc construction. In many cases a replace­ ment system can be altered to a complete system by the Knuth-Bendix completion method.