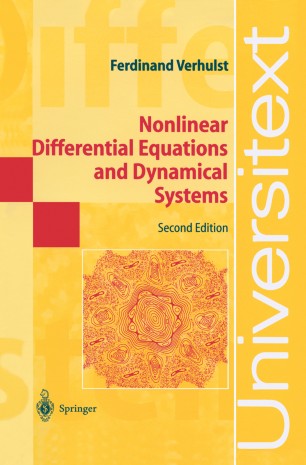 On the subject of differential equations many elementary books have been written. This book bridges the gap between elementary courses and research literature. The basic concepts necessary to study differential equations - critical points and equilibrium, periodic solutions, invariant sets and invariant manifolds - are discussed first. Stability theory is then developed starting with linearisation methods going back to Lyapunov and Poincaré. In the last four chapters more advanced topics like relaxation oscillations, bifurcation theory, chaos in mappings and differential equations, Hamiltonian systems are introduced, leading up to the frontiers of current research: thus the reader can start to work on open research problems, after studying this book. This new edition contains an extensive analysis of fractal sets with dynamical aspects like the correlation- and information dimension. In Hamiltonian systems, topics like Birkhoff normal forms and the Poincaré-Birkhoff theorem on periodic solutions have been added. There are now 6 appendices with new material on invariant manifolds, bifurcation of strongly nonlinear self-excited systems and normal forms of Hamiltonian systems. The subject material is presented from both the qualitative and the quantitative point of view, and is illustrated by many examples.

Ferdinand Verhulst was born in Amsterdam, The Netherlands, in 1939.

He graduated at the University of Amsterdam in Astrophysics and Mathematics. A period of five years at the Technological University of Delft, started his interest in technological problems, resulting in various cooperations with engineers. His other interests include the methods and applications of asymptotic analysis, nonlinear oscillations and wave theory.

He holds a chair of dynamical systems at the department of mathematics at the University of Utrecht.

Among his other interests are a publishing company, Epsilon Uitgaven, that he founded in 1985, and the relation between dynamical systems and psychoanalysis.