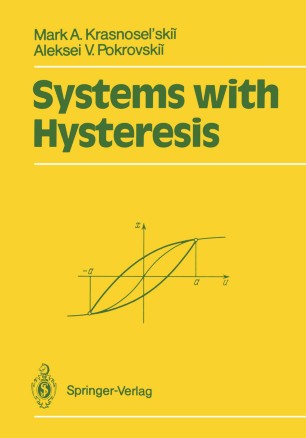 Hysteresis phenomena are common in numerous physical, mechanical, ecological and biological systems. They reflect memory effects and process irreversibility. The use of hysteresis operators (hysterons) offers an approach to macroscopic modelling of the dynamics of phase transitions and rheological systems. The applications cover processes in electromagnetism, elastoplasticity and population dynamics in particular. Hysterons are also typical elements of control systems where they represent thermostats and other discontinuous controllers with memory. The book offers the first systematic mathematical treatment of hysteresis nonlinearities. Construction procedures are set up for hysterons in various function spaces, in continuous and discontinuous cases. A general theory of variable hysterons is developed, including identification and stability questions. Both deterministic and non-deterministic hysterons are considered, with applications to the study of feedback systems. Many of the results presented - mostly obtained by the authors and their scientific group - have not been published before. The book is essentially self contained and is addressed both to researchers and advanced students.