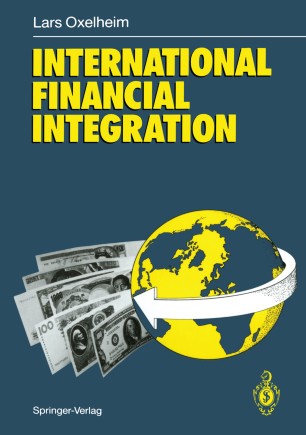 There is widespread agreement in the current social and economic debate that the nations of the world are becoming increasingly integrated. Many structural signs in society also suggest that this is so. Integration has become a catchword in the prepara­ tions for the internal market of the EC, and a keynote in the debate about association for the European countries which do not belong to the Community. But when we turn to the question of how this integration should be measured, there is very little con­ sensus. Instead there are numerous problems, not only about how to measure integra­ tion but even about how to define it. In this book I shall discuss the import and implications of a particular type of integration, namely financial integration, and then look at the most important problems connected with measuring it. In the empirical investigation reported below I felt the need for an integrated micro-macro approach. Further, I decided to illustrate the measurement problems by studying a small and relatively open economy where exchange controls have been imposed by the government in an attempt to reduce the flow of interest-sensitive capital out of the country, and thus to acquire autonomy for the national monetary policy. An interview study has been carried out with a view to illustrating among other things how expectations are formed among the major actors on the financial market, and this provided additional input for an analysis of the level of financial integration.