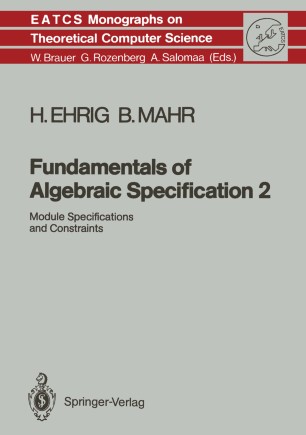 Since the early seventies concepts of specification have become central in the whole area of computer science. Especially algebraic specification techniques for abstract data types and software systems have gained considerable importance in recent years. They have not only played a central role in the theory of data type specification, but meanwhile have had a remarkable influence on programming language design, system architectures, arid software tools and environments. The fundamentals of algebraic specification lay a basis for teaching, research, and development in all those fields of computer science where algebraic techniques are the subject or are used with advantage on a conceptual level. Such a basis, however, we do not regard to be a synopsis of all the different approaches and achievements but rather a consistently developed theory. Such a theory should mainly emphasize elaboration of basic concepts from one point of view and, in a rigorous way, reach the state of the art in the field. We understand fundamentals in this context as: 1. Fundamentals in the sense of a carefully motivated introduction to algebraic specification, which is understandable for computer scientists and mathematicians. 2. Fundamentals in the sense of mathematical theories which are the basis for precise definitions, constructions, results, and correctness proofs. 3. Fundamentals in the sense of concepts from computer science, which are introduced on a conceptual level and formalized in mathematical terms.