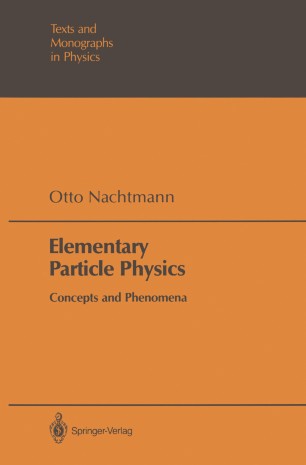 This book grew-how could it be otherwise?-out of a series oflectures which the author held at the University of Heidelberg. The purpose ofthese lectures was to give an introduction to the phenomenology of elementary particles for students both of theoretical and experimental orientation. With the present book the author has set himself the same aim. The reader is assumed to be familiar with ordinary nonrelativistic quantum mechanics as presented, e.g., in the following books: Quantum Mechanics, by L.1. Schiff (McGraw-Hill, New York, 1955); Quantum Mechanics, Vol. I, by K. Gottfried (W.A. Benjamin, Reading, Ma., 1966). The setup of the present book is as follows. In the first part we present some basic general principles and concepts which are used in elementary particle physics. The reader is supposed to learn here the "language" of particle physics. An introductory chapter deals with special relativity, of such funda­ mental importance for particle physics, which most ofthe time is high energy, i.e., highly relativistic physics. Further chapters of this first part deal with the Dirac equation, with the theory of quantized fields, and with the general definitions of the scattering and transition matrices and the cross-sections.