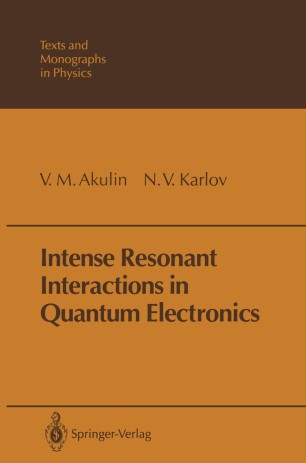 This book is a course of lectures given for senior students at the Moscow Institute of Physics and Technology. For those who have graduated in the USSR this information should beisufficient to give an idea of the level and the manner in which the subject matter is presented. On the other hand, readers outside of this country may never have heard about this well-known Sgviet institution, and so we would like to say few words about it now. The Moscow Institute of Physics and Technology (MFTI or Fiztekh) was founded in 1947 as the result of a special directive of Stalin in order to supply the space and nuclear program with highly educated experts. The best scientists in the country were involved in the foundation process. They invented an effective and flexible educational system that includes basic education accord­ ing to an university program followed by specialization at lead­ ing scientific centers. Being organized initially as a department of Moscow State University, MFTI recently separated into an inde­ pendent institution. In the sixties it lost its mainly top secret and military character and became the most prestigious place in the country for an education in physics. The political changes of the last few years have opened it to contacts with other countries. The course of lectures comprising this book is dedicated to the subject of the intense resonant interaction of laser radiation. with matter and contains a significant part of the Ph. D.