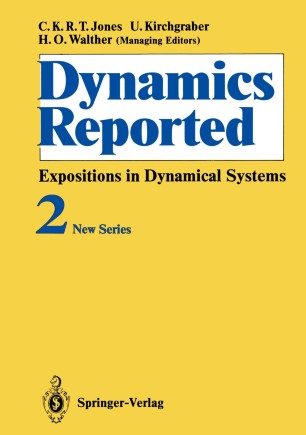 DYNAMICS REPORTED reports on recent developments in dynamical systems. Dynamical systems of course originated from ordinary differential equations. Today, dynamical systems cover a much larger area, including dynamical pro­ cesses described by functional and integral equations, by partial and stochastic differential equations, etc. Dynamical systems have involved remarkably in recent years. A wealth of new phenomena, new ideas and new techniques are proving to be of considerable interest to scientists in rather different fields. It is not surprising that thousands of publications on the theory itself and on its various applications are appearing. DYNAMICS REPORTED presents carefully written articles on major sub­ jects in dynamical systems and their applications, addressed not only to special­ ists but also to a broader range of readers including graduate students. Topics are advanced, while detailed exposition of ideas, restriction to typical result- rather than the most general ones - and, last but not least, lucid proofs help to gain the utmost degree of clarity. It is hoped, that DYNAMICS REPORTED will be useful for those enter­ ing the field and will stimulate an exchange of ideas among those working in dynamical systems.