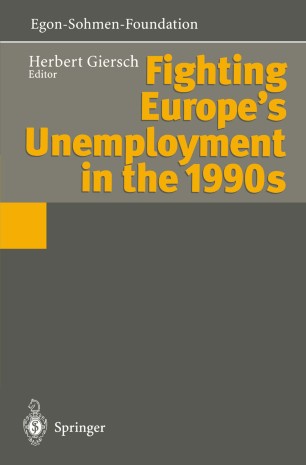 Fighting Europe’s Unemployment in the 1990s

Following the five books listed above on an earlier page, the Egon­ Sohmen-Foundation herewith submits its sixth volume. Once again, it is a collection of academic papers that were discussed at a symposium sponsored by the Foundation and subsequently revised. Readers not familiar with the Foundation may be interested to know that it was established in 1987 by Helmut Sohmen of Hong Kong in memory of his late brother, Egon Sohmen (1930-1977). Egon Soh­ men was an international economist highly respected in North America and in Europe, notably for his work on flexible exchange rates and on the economics of allocation and competition. Born in Linz (Austria) and educated as an economist in Vienna, Tiibingen, and Cambridge, Mass., Egon Sohmen held teaching posts in several places (M.I.T., Yale, Frankfurt, Saarbriicken, Minnesota, and Heidelberg). As an active participant in numerous international con­ ferences and workshops, he truly belonged to the international research community of his time and age cohort. His lasting reputation greatly helped me to convene the active participants of this symposium.