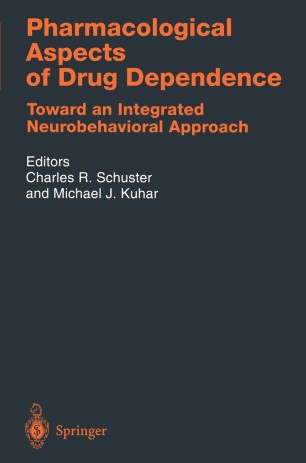 Toward an Integrated Neurobehavioral Approach

In spite of a "war on drugs" that spans years, and in spite of increases in law enforcement efforts and to a lesser extent treatment, substance abuse and dependence continue. While the number of people who experiment with drugs has decreased in recent years, those who use drugs repeatedly, per­ haps several times a week, a measure of "hard core" drug abusers, has not changed, and emergency room visits associated with substances abuse continues to rise. Considering both licit and illicit drug abuse, the number of drug abusers in, for example, the United States is very large and, accordingly, the cost to society is great. A recent Institute of Medicine study suggests that the overall cost is about $66 billion per year (1990 costs). Certainly when assessing the total cost of substance abuse, we must include of the costs of disease and behavioral disorders that are intimately associated with substance abuse. For example, sharing of needles among illicit drug abusers has been and is a critical vector in the spread of drug resistant TB, AIDS, and hepatitis. Further, the use of drugs and alcohol leads to unsafe sexual practices with the attendant risk of AIDS and other sexually transmitted diseases. Tragically, infants are born with drugs in their system and with infections and disease transmitted from the mothers who are drug abusers or their sex partners who are drug abusers.