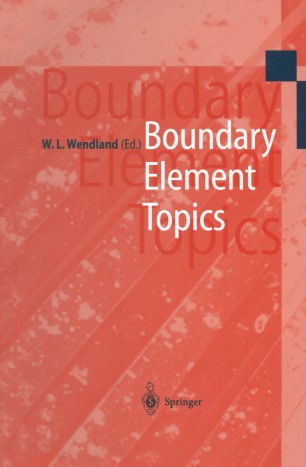 Proceedings of the Final Conference of the Priority Research Programme Boundary Element Methods 1989–1995 of the German Research Foundation October 2–4, 1995 in Stuttgart

The so-called boundary element methods BEM, i.e. finite element approxima­ tions of boundary integral equations have been improved recently even more vividly then ever before and found some remarkable support by the German Research Foundation DFG in the just finished Priority Research Program "boundary element methods" . When this program began, we could start from several already existing particular activities which then during the six years initiated many new re­ sults and decisive new developments in theory and algorithms. The program was started due to encouragement by E. Stein, when most of the later par­ ticipants met in Stuttgart at a Boundary Element Conference 1987. Then W. Hackbusch, G. Kuhn, S. Wagner and W. Wendland were entrusted with writing the proposal which was 1988 presented at the German Research Foun­ dation and started in 1989 with 14 projects at 11 different universities. After German unification, the program was heavily extended by six more projects, four of which located in Eastern Germany. When we started, we were longing for the following goals: 1. Mathematicians and engineers should do joint research. 2. Methods and computational algorithms should be streamlined with re­ spect to the new computer architectures of vector and parallel computers. 3. The asymptotic error analysis of boundary element methods should be further developed. 4. Non-linear material laws should be taken care of by boundary element methods for crack-mechanics. 5. The coupling of finite boundary elements should be improved.