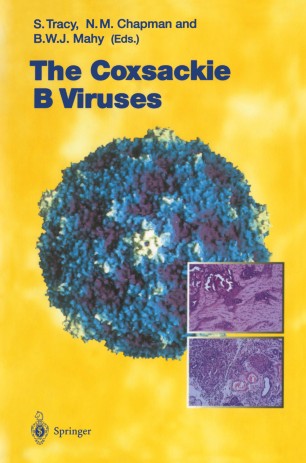 The Coxsackie B Viruses

S. TRACY Late in the 1940s, a virus was isolated from a young patient with a flaccid par­ alysis in the sleepy Hudson River town of Coxsackie in the state of New York. Within the next few years, it was apparent that this and other similar viruses were not polioviruses but were indeed a new group of viruses, viruses that by the mid- 1950s had been found to be commonly associated with pediatric inflammatory heart disease. Two groups of coxsackieviruses (A and B) were differentiated on the basis of the type of paralysis induced in suckling mice by these viruses. Group B coxsackieviruses, because of their primacy as etiologic agents of human acute viral myocarditis and its relatively common sequela, dilated cardiomyopathy, are the focus of this volume. of the century approaches, the massive international effort to eradi­ As the end cate polioviruses through vaccination as causes of human disease has been success­ ful in the Western Hemisphere and in many parts of Europe, and it is expected that worldwide eradication may be achieved within the near future. While this is wonderful news, there are sadly no similar efforts being planned to combat the numerous other human enteroviruses that daily incur widespread morbidity and mortality throughout the world. While this is due in part to the lack of specific know­ ledge about the other human enteroviruses, it is also due to the perceptions of industry that there is insufficient profit to be made by developing these vaccines.