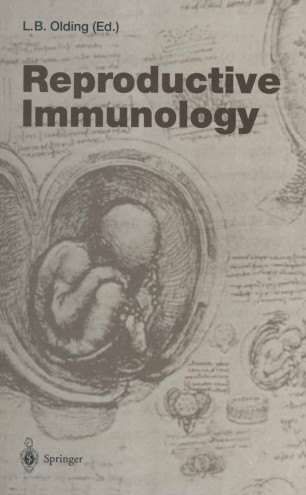 Discrimination of self from nonself is the major function of the immune system and understanding the mechanism(s) involved a main employer of immunologists. Hence, the age-old puzzle of why a fetus that contains a panel of major histocompatibility (MHC) antigens derived from its mother and its father is not rejected (spontaneously aborted) by lymphocytes from its mother who should theoretically recognize foreign MHC molecules from the father has remained of great interest. This dilemma has enticed immunologists and developmental biologists for many years. This volume was created to present the information currently on hand in this subject to the scientific public. The guest editor, Professor Lars Olding, has a long and distinguished history of contributions in this field, having been one of the main propo­ nents of the argument that lymphocytes from the fetus play an active role in this process by suppressing lymphocytes from the mother from proliferating and thereby acting as killer cells. His work has defined the phenomenon and identified suppressor molecules (factors) involved in the process. In a different but related chapter, Margareta Unander extends such observations to the clinical study of women with repeated "habitual" mIS­ carriages.

"...a dense synthesis of current knowledge of the fetomaternal interactions, contains the most recent scientific achievements, and reveals the controversial issues."
Immunology Today
Buy options