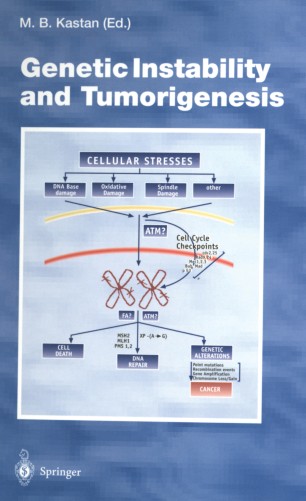 M. B. KASTAN Cancer is a disease resulting from alterations of cellular genes which cause phe­ notypic changes in somatic cells. Usually, when we think about genetic diseases, we think about inheriting one or two abnormal genes from our parents and these gene abnormalities confer the disease phenotype. In contrast, in the majority of cancers, no such inherited gene abnormalities can be identified (which does not mean that they do not exist) and there is no obvious family history suggesting an inherited disease. The vast majority of genes which are altered in the cancer cells are not transmitted through the germ line, but rather become abnormal in somatic cells sometime during the lifetime of the individual. Thus, the critical question which arises is "how do these genetic changes occur in somatic cells?". Epidemiologic data suggest that exposure to environmental carcinogens con­ tributes to the genesis of at least 80% of all human cancers (DOLL and PETO 1981). Thus, it is natural to suspect that the genetic changes in somatic cells which con­ tribute to the transformed phenotype arise from DNA damage caused by such exposures. Therefore, understanding how cells respond to DNA-damaging agents is likely to be an important component of our understanding of the genesis of human tumors.