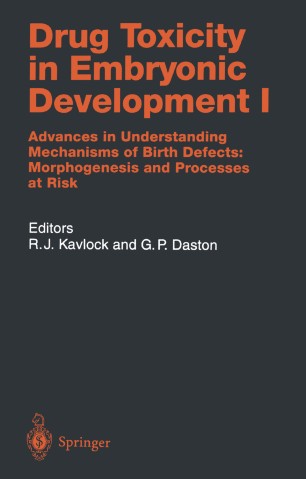 Drug Toxicity in Embryonic Development I

Advances in Understanding Mechanisms of Birth Defects: Morphogenesis and Processes at Risk

Having received the invitation from Springer-Verlag to produce a volume on drug-induced birth defects for the Handbook of Experimental Pharmacology, we asked ourselves what new approach could we offer that would capture the state of the science and bring a new synthesis of the information on this topic to the world's literature. We chose a three-pronged approach, centered around those particular drugs for which we have a relatively well established basis for understanding how they exert their unwanted effects on the human embryo. We then supplemented this information with a series of reviews of critical biological processes involved in the established normal developmental patterns, with emphasis on what happens to the embryo when the processes are perturbed by experimental means. Knowing that the search for mechanisms in teratology has often been inhibited by the lack of understanding of how normal development proceeds, we also included chapters describing the amazing new discoveries related to the molecular control of normal morphogenesis for several organ systems in the hope that the experimental toxicologists and molecular biologists will begin to better appreciate each others questions and progress. Several times during the last two years of developing outlines, issuing invitations, reviewing chapters, and cajoling belated contributors, we have wondered whether we made the correct decision to undertake this effort.