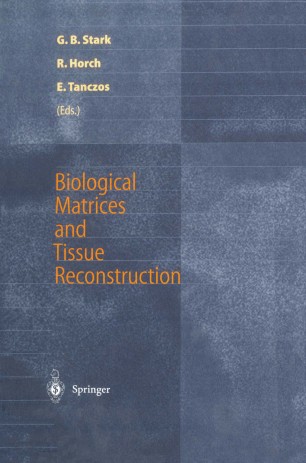 C.A. VACANTI The loss or failure of an organ or tissue is one of the most frequent, devastating, and costly problems in human health care. Advances in the medical sciences have enabled physicians to restore lost functions in their patients through or­ gan transplantation, reconstructive surgery with autogenous tissue transfer, or the implantation of alloplastic materials. Although only recently termed "Tissue Engineering" [1], the use of biological andlor synthetic materials in conjunction with cells to create biologic substitutes to serve as functional tis­ sue replacements has been explored by modern scientists for several decades. The concept of generating functional tissue from an organ biopsy was de­ scribed very early in the literature: "The Lord God cast a deep sleep on the man, and while he was asleep, he took out one of his ribs and closed up its place with flesh. The Lord God then built up into a woman the rib that he had taken from the man" [2]. Review of history further reveals that, according to legend, the first homotransplantation of an entire limb was performed by Saints Damian and Cosmas, as depicted by the artist Fra Angelico.