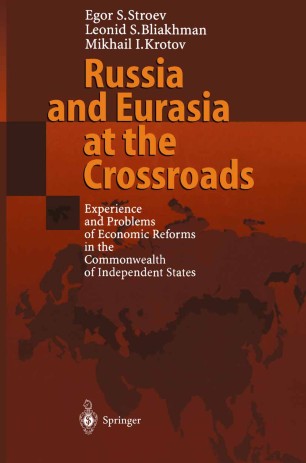 Russia and Eurasia at the Crossroads

This last century of the second millennium has compressed human history to such an extent that whole ages of engineering, economics, social politics and the humanities have been accommodated in decades or even years. Mankind has matured and applied its cognitive and creative genes to advance science and to internationalise future goals, including the vital goal of sustainable social development. However, having no control over the new pace of history, twentieth-century civilisation has faced global cataclysms of a frequency and depth unprecedented and inconceivable in the past millennia. Among the recent "crises" to be "resolved" in the third millennium is disintegration of the Soviet Union, the biggest state and third largest population in the world. Regretfully, the pace of change in the Soviet Union had been slower than the rates of reform elsewhere. Attempts at economic redecorating instead of radical market-oriented reforms failed. In Soviet society, general discontent with the progress of perestroika in the 1980s provoked the "child complacency" syndrome that is typical of a young mind contemptuous of any adult action: it is convinced that things could have been done much better and much quicker. With the new millennium approaching, the Soviet Union gave way to 15 new states ridden with both inherited and acquired economic, political and social maladies. It is common knowledge, however, that childhood epidemics are short-lived.