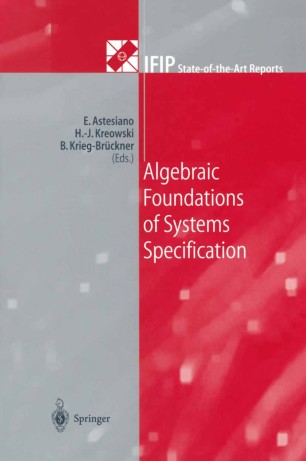 The aim of software engineering is the provision and investigation of methods for the development of software systems of high quality with correctness as a key issue. A system is called correct if it does what one wants, if it meets the requirements. To achieve and to guarantee correct systems, the need of formal methods with rigorous semantics and the possibility of verification is widely accepted. Algebraic specification is a software engineering approach of this perspective. When Liskov and Zilles, Guttag and the ADJ-group with Goguen, Thatch­ er, Wagner and Wright introduced the basic ideas of algebraic specification in the mid seventies in the U. S. A. and Canada, they initiated a very successful and still flourishing new area. In the late seventies, algebraic specification became a major research topic also in many European countries. Originally, the algebraic framework was intended for the mathematical foundation of ab­ stract data types and the formal development of first-order applicative pro­ grams. Meanwhile, the range of applications has been extended to the precise specification of complete software systems, the uniform definition of syntax and semantics of programming languages, and to the stepwise development of correct systems from the requirement definitions to the running programs. The activities in the last 25 years have led to an abundance of concepts, methods, approaches, theories, languages and tools, which are mathemati­ cally founded in universal algebra, category theory and logic.