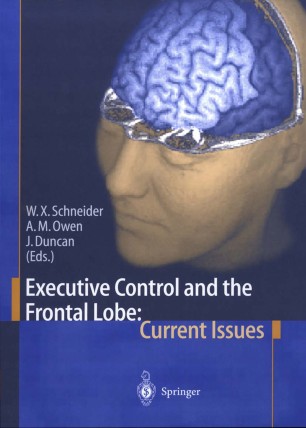 While the importance of the prefrontal cortex for 'higher-order'cognitive functions is largely undisputed, no consensus has been reached regarding the precise fractionation of these functions. For example, although some degree of regional specialization within the frontal lobe seems inevitable, to date, most attempts to map specific cognitive functions onto neuroanatomical and/or cytoarchitectonic sub-divisions have been disappointing. The chapters in this volume are based on the workshop on "Executive Control and the Frontal Lobe: Current Issues"at the Hanse Institute for Advanced Study in Delmenhorst, Germany and, accordingly, most of the methodological approaches and theoretical positions within the field are well represented. Accordingly, several of the authors have focussed on behavioural and/or imaging data acquired from patients with discrete frontal-lobe lesions, while others have described the results of lesion studies in the monkey which attempt to shed light on both the anatomical and functional organisation of the prefrontal cortex. Several complimentary chapters have considered functional studies of frontal-lobe functions in healthy control volunteers, either through meta-analysis or by focussing on specific aspects of working memory, motor planning and programming or associative learning. Finally several chapters cover more global methodological approaches to the study of frontal-lobe functions, highlighting its role in arbitrary visuomotor mapping and cross-temporal action control, while in one chapter the intractions between the neuromodulatory executive systems of the reticular core and the frontal lobe are described. The Delmenhorst meeting was remarkable, not only for the sheer breadth of work discussed, but also for the widely differing approaches and opinions of some of those presenting it. This volume captures much of that same flavour and will provide the reader with up-to-date information from some of the leading figures in frontal lobe research.