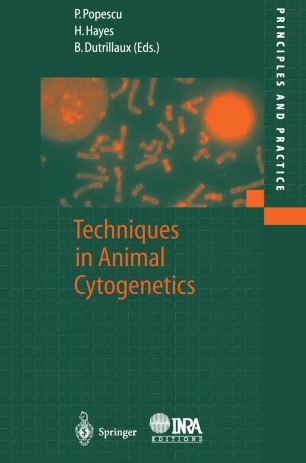 Part of the Principles and Practice book series (PRINCIPLES)

A better "casting" could not be conceived. The authors of this book are gold­ smiths on the subject. I have followed their work since their "entry" into cyto­ genetics and I have a high esteem for them. I consider it an honour to be asked to write the preface of their opus. Paul Popescu, Directeur de Recherche at INRA, has also played a promi­ nent part in the development of animal cytogenetics, especially in domestic animals. He is able to tell you the cost of a translocation in a pig breeding farm or a cow population: a fortune! P. Popescu has played a great part in gene mapping of these species using "in situ DNA hybridisation". His contributions are recognised world-wide. His laboratory receives many visitors every year and it serves as a reference for domestic animal cytogenetics. Helene Hayes, Charge de Recherche at INRA, has collaborated with P. POPESCU in the elaboration of the "at hand" techniques and in many other discoveries which are listed in her bibliography. She showed the fascinating correspondence between bovine and human chromosomes and the com­ pared gene maps of domestic bovidae.