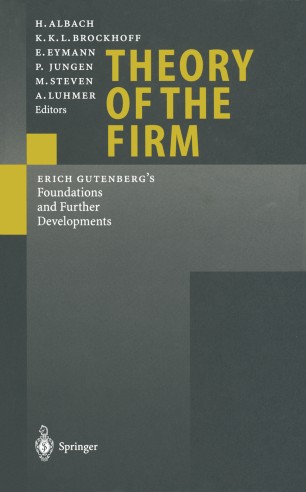 Theory of the Firm

This book has an objective and a focus. It provides the reader with: • an in-depth acquaintance with the theory of the firm developed by Erich Gutenberg • an insight into a coherent body of current German research in the theory of the firm. The book is divided into two parts. The first part lays the foundations. It presents Gutenberg's theory of the firm to the English speaking reader. Considering the great importance that Erich Gutenberg has had in Germany and taking into consideration the impact that the translations of his path-breaking three volumes "Principles of Management" have had in France, the Spanish speaking countries, and in Japan, it was felt that it was necessary, on the occasion of his tOOth anniversary, to present a concise summary of his contributions to the theory of the firm to an English speaking scientific community. Six papers present Gutenberg's theory in the light of the theoretical advances that he stimulated as well as in the framework of other theoretical developments like capital market theory, transaction cost theory, principal agent theory, and contract theory. The papers show that Gutenberg's theory is highly relevant for theory and highly influential in the practice of management.