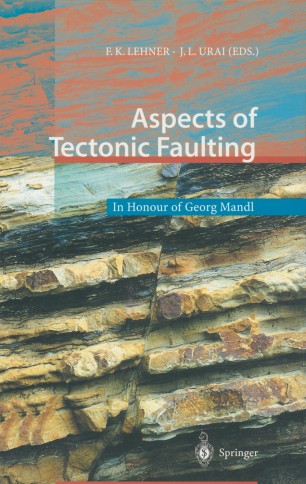 In Honour of Georg Mandl

This Volume brings together twelve contributions to a symposium held in hon­ our of GEORG MANDL at the University of Graz, Austria on December 1-2, 1995, in the year of his 70th anniversary. It is a tribute to a formidable scientist colleague and friend and a gift of gratitude to an inspiring leader and great in­ stigator. A man, who began as a theoretical physicist, made fundamental contri­ butions to the theory of transport processes in porous media and the mechanics of granular materials, but in his forties turned to structural geology and the me­ chanics of tectonic faulting - a subject that has since remained at the center of his interests and the understanding of which was substantially advanced by Georg Mandl's work. In addressing different aspects of tectonic faulting, mostly if not entirely from a theoretician's or modeler's point of view, the contribu­ tions to this Volume reveal some of the astonishing richness of the subject, the corresponding diversity in approaches and also challenges that lie ahead. They aptly evoke the broad scientific culture brought by Georg Mandl to the study of his favourite subject, a culture he had acquired in the course of a career in a nowadays rare environment of industrial research and which interested readers will find sketched in the Biographical Note included in this Volume. As such, as well as in their own right, the papers contributed to this Festschrift should be of interest to a wider community of Earth scientists.