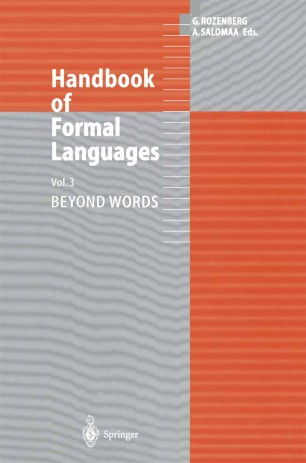 The need for a comprehensive survey-type exposition on formal languages and related mainstream areas of computer science has been evident for some years. In the early 1970s, when . the book Formal Languages by the second­ mentioned editor appeared, it was still quite feasible to write a comprehensive book with that title and include also topics of current research interest. This would not be possible anymore. A standard-sized book on formal languages would either have to stay on a fairly low level or else be specialized and restricted to some narrow sector of the field. The setup becomes drastically different in a collection of contributions, where the best authorities in the world join forces, each of them concentrat­ ing on their own areas of specialization. The present three-volume Handbook constitutes such a unique collection. In these three volumes we present the current state of the art in formal language theory. We were most satisfied with the enthusiastic response given to our request for contributions by specialists representing various subfields. The need for a Handbook of Formal Languages was in many answers expressed in different ways: as an easily accessible his­ torical reference, a general source of information, an overall course-aid, and a compact collection of material for self-study. We are convinced that the final result will satisfy such various needs. The theory of formal languages constitutes the stem or backbone of the field of science now generally known as theoretical computer science.