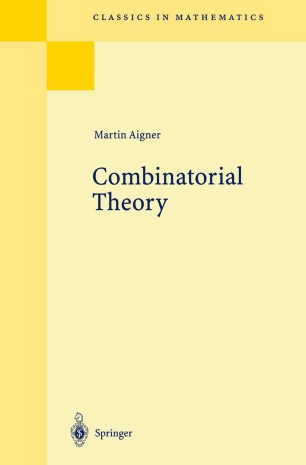 Reihentext + Combinatorial Theory From the reviews: "This book presents a very good introduction to combinatorics. It covers most aspects of enumeration and order theory,... It is divided into three parts. The first part presents the basic material on mappings and posets... The second part deals with enumeration ... Finally the third part treats of the order-theoretic aspects ... In the text examples are given and at the end of each chapter valuable notes, also very good selected exercises. They constitute an organic part of the book. This book can warmly be recommended first of all to students interested in combinatorics. A two semester course can also be based on it." (Publicationes Mathematicae Debrecen)

Martin Aigner received his Ph.D. in Mathematics in 1965 from the University of Vienna. He then spent five years in the United States, the last two at the University of North Carolina at Chapel Hill where he was introduced to the combinatorial world (which he has never left since) by G. C. Rota and the late R. C. Bose. After extensive travels he returned to Europe and spent three years at the University of Tübingen with a senior fellowship of the German Science Foundation. Since 1974 he has been a Professor of Mathematics at the Free University of Berlin.
Martin Aigner has published in various fields of combinatorics and graph theory and is the author of several monographs on discrete mathematics, graph theory and the theory of search.