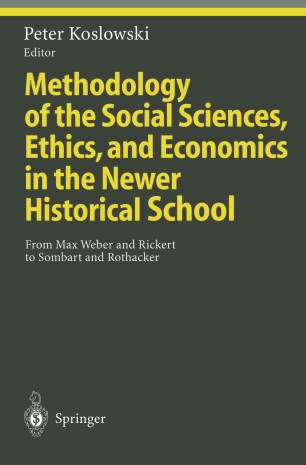 Methodology of the Social Sciences, Ethics, and Economics in the Newer Historical School

From Max Weber and Rickert to Sombart and Rothacker

The volume at hand gives an exposition of the tradition of the Historical School of Economics and of the Geisteswissenschaften or human sciences, the latter in their development within the Historical School as well as in Neo-Kantianism and the sociology of knowledge. It continues the discussion started in the year 1994 on the Older Historical School of Economics and the 19th century German contribution to an ethical theory of economics with the Newer Historical School of the 20th century. Economists, social scientists, and philosophers examine the contribution of this tradition and its impact for present theory. The schools of thought and their approaches to economics as well as to the cultural and social sciences are examined here not as much for their historical interest as for their poten­ tial systematic contribution to the contemporary debates on economic ethics, economics, sociology, and philosophy. The volume at hand contains the proceedings of the Fourth Annual SEEP-Conference on Economic Ethics and Philosophy in 1996, "Economics and Ethics in the Historical School. Part B: Max Weber, Heinrich Rickert, Max Scheler, Werner Sombart, Arthur Spiethoff, John Commons, Alfred Marshall, and Others", held at Marienrode Monastery near Hannover, Germa­ ny, on March 27-30th, 1996, together with several additional invited papers.