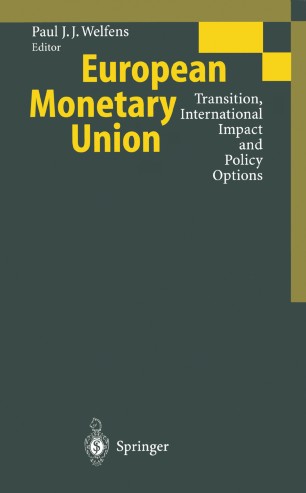 Paul J. J. Welfens European monetary union has been discussed for more than three decades and is likely to be realized in 1999. One may anticipate generous interpretations of the fiscal convergence criteria. Such generosity consistent with the Maastricht Treaty might impair the credibility of the ECB and the stability of the Euro, respectively, despite the fact that inflation is a monetary phenomenon and has little to do with government deficits, unless they were financed via the printing press, which is excluded in the Maastricht Treaty. The European Commission's forecast of spring 1997 suggests that Italy will have problems in joining the EMU starter group as the is expected to be 3. 2% in 1997 and even 3. 9% in 1998. A Italian deficitlGDP ratio fully developed EMU group (with all 15 cowltries included) would represent 38% of the OECD GDP, slightly higher than the U. S. with 33% (Japan 21%). The exports/GDP ratio of EU countries is 30%, the ratio with respect to exports outside the EU would be 10% (Japan, U. S. 8%). The share of the U. S. dollar in international currency reserves fell from 67% to 40% in 1995, while the share of European currencies increased from 13% to 37%. Prior to the EMU, market participants have to anticipate whether a transition to 1999 will bring windfall losses or gains in various bond markets.