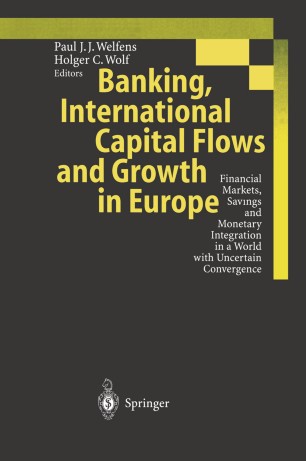 Financial Markets, Savings and Monetary Integration in a World with Uncertain Convergence

Paul J.J. Welfens and Holger C. Wolf While the economies of Asia and, more recently, South as well as North America have enjoyed sustained high growth, the growth performance of western Europe and in particular continental Europe has been rather modest. Coupled with sizable improvements in labor productivity and - at best - steady capital productivity, growth proved insufficient to sustain employment levels, much less to replicate the US job creation success. Relative inflation performance has been much better: in the run-up to European Monetary Union inflation rates have dramatically converged towards the lower end of the distribution while risk premia on formerly high inflation economies have fallen. Yet, looking forward, the undoubted success in achieving price stability is mitigated by the lackluster growth -and in particular employment -performance. Indeed, the relative little attention paid to initiatives directed at raising economic growth is startling, not only in the light of the US policy record but also in light of the remarkable rebound of those European economies which have aggressively tackled the structural problems, most prominently the UK and Ireland.