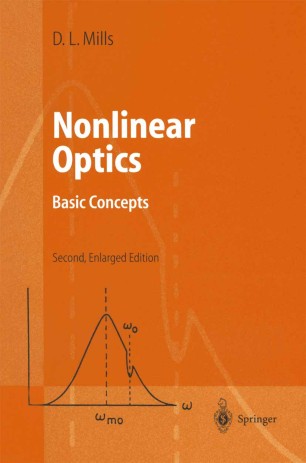 "Fundamental principles and experimental results make this a very complete and accessible introduction. Used either as the basic of an MSc-level course or as a reader, this book will be invaluable as an introduction to the field for beginning graduates in physics or engineering. It will also provide an excellent overview and reference work for researchers already active in the field." (Physicalia 35/1999) Anyone planning to use this book as a guide for a second- year graduate course in nonlinear optics would have to include a great deal of outside reading, or supplement it with one of the more established texts in the field (for example, Yarivs). As a note on structure, I would have appreciated a much more detailed index, and especially an author index with cross references to the subject index. Given the audience Mills is attempting to address, these additions would add greatly to its usefulness. I recommend this book to any first-year graduate student who may wish to learn about the opportunities of this exciting field. But to really learn what is going on, or what is involved in the subject, the student will need to be guided by a book that goes into greater details. RICHARD R. FREEMAN University of Californio, Dauis Physics Today, 9, 1999 This will be an extremely useful text for those wishing to enter the field of non-linear optics, provided that they already are well-versed in electromagnetic . theory and the basic tools of mathematical physics. ln short this is a book for practised theoretical (or; at least, theoretically-minded) physicists who wish to gain familiarity with the subject for interest or for research. It will also be useful as a reference for practi- cal physicists in the field, provided that it is sup- plemented with texts which provide more data from the real world. The book contains well-considered problems at the end of each chapter (but no solutions), three useful appendices, and a comprehensive reference list. A.J. Rogers King's College London, School of Physical Sciences, (Optics and Laser Technology, 31, 1999 "The text develops the basic principles that underlie nonlinear optical phenomena in matter, in an approach orientated to the general reader or student with a background in classical electromagnetic theory. ...The text is aimed at the student or researcher who is not a specialist in optics, and who wishes to acquire an introduction to the principal concepts as a precursor to the consultation of the specialized literature." P. Fleischmann, Zeitschrift für Licht und Elektronenoptik, 2000, 111, 11
Buy options