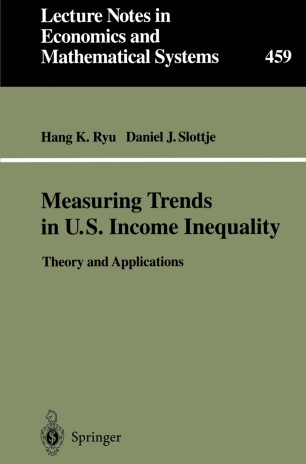 This book is the culmination of roughly seven years of joint research be­ tween us. We have both been interested in income inequality measurement for a considerably longer period of time. One author (Ryu) has a back­ ground in physics. While he was working on his Ph. D. in Physics at M. I. T. he became acquainted with Robert Solow. Professor Solow introduced Ryu to economics. After finishing his Ph. D. in physics, Ryu went on to the Uni­ versity of Chicago where Arnold Zellner guided him to a dissertation on using orthonormal basis and maximum entropy as estimation methods in econometric applications. The precise definition and examples of orthonormal basis (ONB) and maximum entropy (ME) methods will be given in the book. As it turns out, a natural application of these methods is the study of income distribution. Professor Zellner suggested that Ryu look at some of my joint work with Robert Basmann on functional forms of Lorenz curves as one starting place to do his own research. Ryu requested some of our data and asked for several of our papers with the express pur­ pose of introducing functional forms of Lorenz curves that Ryu felt would do a better job of approximating the empirical Lorenz curve. Thus, our first introduction was essentially one of Ryu trying to invent a better mousetrap. The interested reader can review the results given in Basmann et al. (1990) and Chapter Four of this book to see if Ryu succeeded.