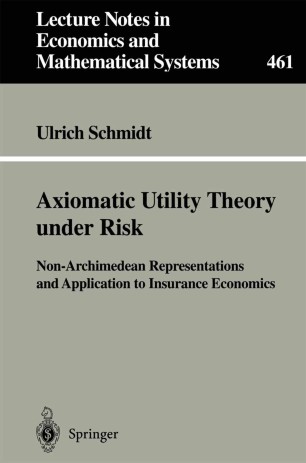 The first attempts to develop a utility theory for choice situations under risk were undertaken by Cramer (1728) and Bernoulli (1738). Considering the famous St. Petersburg Paradox! - a lottery with an infinite expected monetary value -Bernoulli (1738, p. 209) observed that most people would not spend a significant amount of money to engage in that gamble. To account for this observation, Bernoulli (1738, pp. 199-201) proposed that the expected monetary value has to be replaced by the expected utility ("moral expectation") as the relevant criterion for decision making under risk. However, Bernoulli's 2 argument and particularly his choice of a logarithmic utility function seem to be rather arbitrary since they are based entirely on intuitively 3 appealing examples. Not until two centuries later, did von Neumann and Morgenstern (1947) prove that if the preferences of the decision maker satisfy cer­ tain assumptions they can be represented by the expected value of a real-valued utility function defined on the set of consequences. Despite the identical mathematical form of expected utility, the theory of von Neumann and Morgenstern and Bernoulli's approach have, however, IFor comprehensive discussions of this paradox cf. Menger (1934), Samuelson (1960), (1977), Shapley (1977a), Aumann (1977), Jorland (1987), and Zabell (1987). 2Cramer (1728, p. 212), on the other hand, proposed that the utility of an amount of money is given by the square root of this amount.