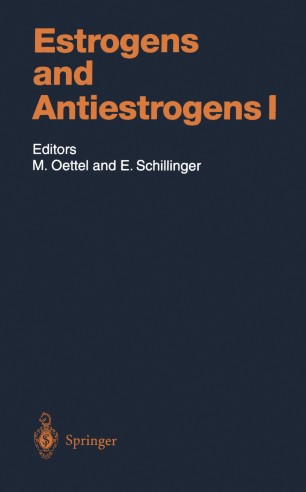 Estrogens and Antiestrogens I

Physiology and Mechanisms of Action of Estrogens and Antiestrogens

For many years, Springer has been publishing an impressive series of textbooks of pharmacology which have set standards in medical science. Surprisingly, an extensive overview of the current state of the art in research on estrogens and anti estrogens was still lacking. The present two volumes on estrogens and antiestrogens provide a comprehensive review of a field of research in which remarkable progress has been made over the past few years. New insights into the mechanisms of steroid hormone action resulted in a tremendous number of publications from which new principles of preventive and therapeutic appli­ cations of estrogens and antiestrogens emerged. Although various electronic data bases provide easy access to this copious information, there was a clear necessity for a monograph-style textbook which assesses and summarizes current knowledge in this rapidly expanding field of research. It should be noted, however, that, due to this dynamic development, it is barely possible to comprehensively update every aspect of basic and clinical knowledge on estro­ gens and antiestrogens. Thus, the intention of the editors was to provide the reader with an overview of the "classic" and most recently explored areas of research and stimulate future interests in basic and applied endocrinology. Estrogens were among the first steroid hormones described in the scientific literature. Since they were first isolated, since the chemical, synthesic and pharmacological characterization of naturally occurring estrogens and, later on, of orally active derivatives, estrogen research has produced continu­ ously hallmark results in reproductive endocrinology worldwide.