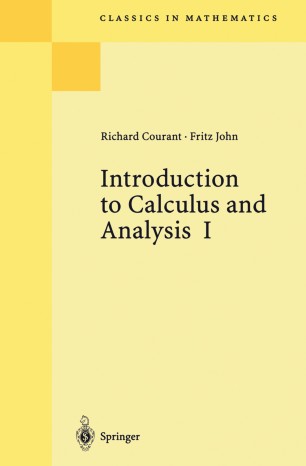 Introduction to Calculus and Analysis I

From the reviews: "Volume 1 covers a basic course in real analysis of one variable and Fourier series. It is well-illustrated, well-motivated and very well-provided with a multitude of unusually useful and accessible exercises. (...) There are three aspects of Courant and John in which it outshines (some) contemporaries: (i) the extensive historical references, (ii) the chapter on numerical methods, and (iii) the two chapters on physics and geometry. The exercises in Courant and John are put together purposefully, and either look numerically interesting, or are intuitively significant, or lead to applications. It is the best text known to the reviewer for anyone trying to make an analysis course less abstract. (...)" The Mathematical Gazette (75.1991.471)

Richard Courant was born in 1888 in a small town of what is now Poland, and died in New Rochelle, N.Y. in 1972. He received his doctorate from the legendary David Hilbert in Göttingen, where later he founded and directed its famed mathematics Institute, a Mecca for mathematicians in the twenties. In 1933 the Nazi government dismissed Courant for being Jewish, and he emigrated to the United States. He found, in New York, what he called "a reservoir of talent" to be tapped. He built, at New York University, a new mathematical Sciences Institute that shares the philosophy of its illustrious predecessor and rivals it in worldwide influence.
For Courant mathematics was an adventure, with applications forming a vital part. This spirit is reflected in his books, in particular in his influential calculus text, revised in collaboration with his brilliant younger colleague, Fritz John.
(P.D. Lax)

Fritz John was born on June 14, 1910, in Berlin. After his school years in Danzig (now Gdansk, Poland), he studied in Göttingen and received his doctorate in 1933, just when the Nazi regime came to power. As he was half-Jewish and his bride Aryan, he had to flee Germany in 1934. After a year in Cambridge, UK, he accepted a position at the University of Kentucky, and in 1946 joined Courant, Friedrichs and Stoker in building up New York University the institute that later became the Courant Institute of Mathematical Sciences. He remained there until his death in New Rochelle on February 10, 1994.
John's research and the books he wrote had a strong impact on the development of many fields of mathematics, foremost in partial differential equations. He also worked on Radon transforms, illposed problems, convex geometry, numerical analysis, elasticity theory. In connection with his work in latter field, he and Nirenberg introduced the space of the BMO-functions (bounded mean oscillations). Fritz John's work exemplifies the unity of mathematics as well as its elegance and its beauty.
(J. Moser)

From the reviews: "Volume 1 covers a basic course in real analysis of one variable and Fourier series. It is well-illustrated, well-motivated and very well-provided with a multitude of unusually useful and accessible exercises. [...]It is the best text known to the reviewer for anyone trying to make an analysis course less abstract." --The Mathematical Gazette