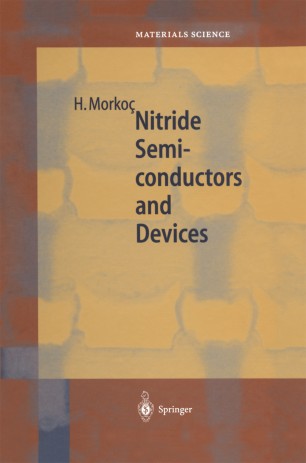 A View of the Past, and a Look into the Future by a Pioneer By Jacques I. Pankove This forword will be a brief review of important developments in the early and recent history of gallium nitride, and also a perspective on the current and future evolution of this exciting field. Gallium nitride (GaN) was syn­ thesized more than 50 years ago by Johnson et al. [1] in 1932, and also by Juza and Hahn [2] in 1938, who passed ammonia over hot gallium. This method produced small needles and platelets. The purpose of Juza and Hahn was to investiagte the crystal structure and lattice constant of GaN as part of a systematic study of many compounds. Two decades later, Grim­ al. [3] in 1959 employed the same technique to produce small cry­ meiss et stals of GaN for the purpose of measuring their photoluminescence spectra. Another decade later Maruska and Tietjen [4] in 1969 used a chloride trans­ port vapor technique to make a large-area layer of GaN on sapphire. All of the GaN made at that time was very conducting n-type even when not deli­ berately doped. The donors were believed to be nitrogen vacancies. Later this model was questioned by Seifert et al. [5] in 1983, and oxygen was pro­ as the donor. Oxygen with its 6 valence electrons on a N site (N has 5 posed valence electrons) would be a single donor.