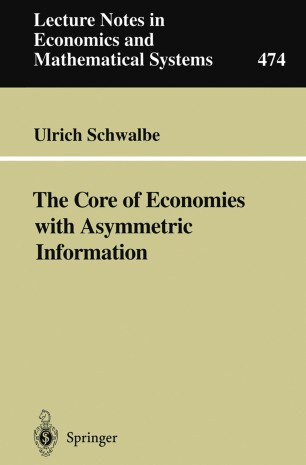 The Core of Economies with Asymmetric Information

and should therefore constitute a part of every area of economic 3 theory. The spectrum covered by information economics today ranges from Stigler's search theory4 to industrial economics, including oligopoly theory, innovation, as well as research and develop­ 5 ment. However, the area information economics is most closely connected with is the theory of optimal contracts, mainly ana­ 6 lyzed in principal-agent models. Contract theory deals primar­ ily with the question of how optimal arrangements (contracts) for the purchase and sale of commodities and services between two or more agents should be structured. In these models, it is often assumed that the parties to the contract are informed differently or asymmetrically about relevant variables (e. g. the health of one party in the case of insurance contracts, or the effort in relation to employment contracts). As a result of this asymmetric in­ formation, phenomena such as moral hazard, adverse selection, signaling, and screening may arise. Frequently, results from con­ tract theory are referred to when making statements about the effects of asymmetric information on an economy. Models of this kind are often used to explain phenomena such as fixed wages or unemployment, among others. 7 However, such conclusions must be treated with caution for two reasons. In the first place, in these models, a contract (explicit or implicit) is determined by the solution of an optimization prob­ lem.