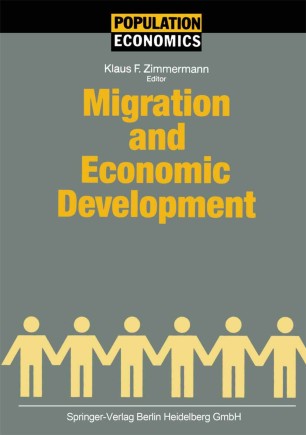 Klaus F. Zimmermann Migration has become a topic of substantial interest in Europe in recent years. Part of this interest is driven by the important political changes in East Europe and the potential threat of large East-West migration waves. However, due to the large differences in economic development a substantial migration pressure is also expected from the South of Europe as of other parts of the world. The global migration potential towards the higher developed areas has reached about 80 to 100 million people. Thereof, about 60 million would like to move permanently, 20 million temporarily and about 15 million are refugees and asylum seekers and approximately 30 million are iIIegals. The book consists of eight papers which are allocated to five parts: Theoretical Models (Part I), Performance of Migrants (Part 11), Migration Within Developing Countries (Part IV) and Immigration Policy (Part V)' Each paper begins with a brief summary of its content. Part I, Theoretical Models, contains first "A Microeconomic Zlmm.r-mann VI Model of Migration" by Siegfried Berninghaus and Hans-GUnther Seifert-Vogt. They study migration decision making under incomplete information and apply it to empirically relevant phenomena. The second paper by Gerhard Schmitt-Rink "Migration and International Factor Price Equalization" demonstrates that international migration tends to equalize national factor prices and factor shares even in the absence of international trade. In Part II, Performance of Migrants, Lucie Merkle and Klaus F.