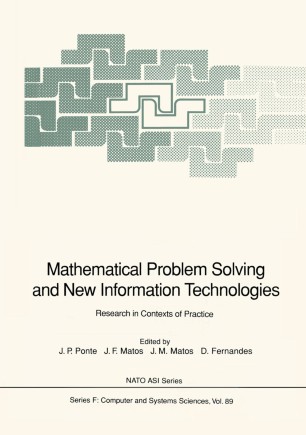 Research in Contexts of Practice

A strong and fluent competency in mathematics is a necessary condition for scientific, technological and economic progress. However, it is widely recognized that problem solving, reasoning, and thinking processes are critical areas in which students' performance lags far behind what should be expected and desired. Mathematics is indeed an important subject, but is also important to be able to use it in extra-mathematical contexts. Thinking strictly in terms of mathematics or thinking in terms of its relations with the real world involve quite different processes and issues. This book includes the revised papers presented at the NATO ARW "Information Technology and Mathematical Problem Solving Research", held in April 1991, in Viana do Castelo, Portugal, which focused on the implications of computerized learning environments and cognitive psychology research for these mathematical activities. In recent years, several committees, professional associations, and distinguished individuals throughout the world have put forward proposals to renew mathematics curricula, all emphasizing the importance of problem solving. In order to be successful, these reforming intentions require a theory-driven research base. But mathematics problem solving may be considered a "chaotic field" in which progress has been quite slow.